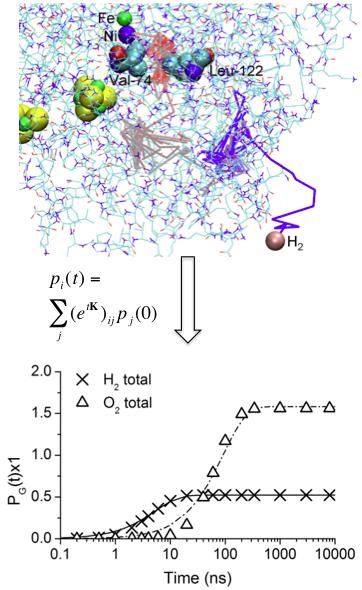 In all the examples mentioned above, a small molecule must travel from the solvent to the small catalytic site, that is embedded in a large and densly packed heterogeneous protein matrix (see top picture on the left hand side). For the gas molecule, this seems like finding a needle in the haystack. So, how does the molecule finds its way to the target ? In collaboration with Robert Best of Cambridge University, we have recently developed a multiscale molecular simulation approach [JACS11 PCCP11]. Gas diffusion is described by hopping between discrete sites within the protein and the gas diffusion dynamics solved using a master equation approach (see bottom picture on the left hand side)

Applying the method to gas diffusion in hydrogenase, we found that gas molecules move within multiple hydrophobic cavities or `tunnels’ towards a central cavity from where the gas molecules make the final transit to the catalytic site. The functional role of the protein can be compared to the one of a funnel guiding the small molecules towards to target. Interestingtly, not all of the tunnels are readily available by gas molecules. Instead, some are dynamically formed by the finite temperature fluctuations of the protein. While this research sheds light on a fundamental problem in biophysics, the simulations could help engineer proteins so as to optimize their properties for gas diffusion. For instance, one `dream-goal’ for hydrogenase researchers is to engineer a gas filter selective for molecular oxygen into the protein structure, since O2 inhibits or sometimes even damages the protein when it reaches the active site. The oxygen sensitivity of the enzyme is one major problem that hampers commercial applications of hydrogenase-based biofuel cells.