Proton transfer is the most frequently occurring chemical reaction in biological systems. Protons catalyze chemical reactions at the active site of proteins, serve as terminal electron acceptors in hydrogen producing enzymes, convert energy through diffusion across the mitochondrial membrane, and facilitate ion exchange in membrane bound antiporters, to name just a few examples. Central to the understanding of the molecular mechanisms of such processes is the knowledge of the microscopic protonation states or pka values of the protein residues in a given protein conformation. 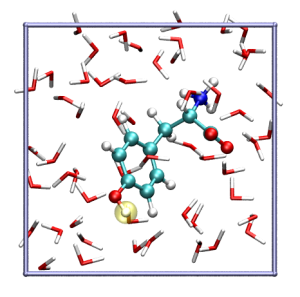 There has been much effort in the computational chemistry and biophysics community to aid the determination of acidity constants in biologically relevant molecules and in proteins. Continuum electrostatics and empirical methods have been steadily improved and developed in the past years. They now achieve a remarkably good accuracy in situations where the protein environment is not too dissimilar from the environment of the protein residues that have been used to `train’ the method. The transferability of these models to non-standard, but important protein environments, such as active sites, buried hydrophobic regions, and salt bridges, is questionable, however. The problem of transferability can in principle be addressed by using more realistic descriptions, such as molecular dynamics simulation with classical, or QM/MM potentials in combination with thermodynamic integration. The latter methods have delivered respectable results so far, but they need to be further improved in order to become reliable tools for in non-standard environments.

In order to decrease the dependency on experimental data we are aiming to develop a density functional (DFT) based pKa prediction method in small molecules and proteins. We have recently carried out a benchmark study for the prediction of abolute pka values of amino acids in aqueous solution from density functional based molecular dynamics simulation (see tyrosine pictured on the left hand side) [JCTC11]. As it is computationally too demanding to calculate whole proteins on this level of theory, we attempt to perform the dynamics classically and calculate the energies of different conformations with combined quantum mechanics/molecular mechanics (QM/MM). These are the first steps in the development of a more rigorous pKa prediction method.